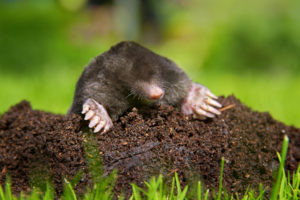 Moles and Your Yard

Although you pay the most attention to lawn damage in the warmer months, moles are active year-round. During winter, they burrow further into the soil. Meanwhile, their mating season spans from March to June.

We typically see two types of moles in Central Pennsylvania; the star-nosed and the eastern. Star-nosed prefer to live near water and damp areas; they are semi-aquatic. Eastern moles like well-drained soil including your lawn and garden. Moreover, they are categorized as insectivores; mainly eating earthworms, grubs, and other underground arthropods.

Their cylindrical-shaped bodies are covered by brown or gray fur. They range from four to nine inches including their tail length. The feet, nose, and tail are all pink, flesh-like features. While the eastern has a conventional snout, the star-nosed has tentacle-like appendages. In short, they use their noses as a touch organ to identify their dinner and other moles.

In ideal conditions, moles can tunnel up to eighteen feet per hour. That’s a lot of tunneling even with a moderately sized yard! When soil is pushed forward ahead of the mole, it creates mounds or molehills. These mounds are a telltale sign of your new resident. As they create their expansive system of tunneling, they disconnect roots and uproot new plants. They don’t actually eat the roots, but these are often in the way of their dinner!

“Moles are Blind” – Although their eyes aren’t always visible, they are not blind! They do have poorly developed eyesight.

“Poisons are Effective” – We haven’t seen any successful mole poisons. Trapping assures that they stay away.

“Flattening their tunnels will make them leave” – They will keep digging regardless. It’s what they’re born to do!

First, we assess the area using our knowledge and experience. Once we form a plan, we begin the trapping process. All traps we use are approved by the Pennsylvania Game Commission. In order to be effective, traps must be placed in their tunneling systems. Once we have caught the offenders, we make recommendations to implement repairs. Depending on the damage, flattening tunnels can be an ideal solution. If damage is extensive, we’ll recommend other solutions for lawn aftercare.

If you believe you have unwanted lawn residents, don’t hesitate to call us or contact us.